Malcolm is active in student governance at Lawrence as well, finishing his first year as a chair for the Committee on Diversity Affairs (CODA) of the Lawrence University Community Council (LUCC), Lawrence’s student government. CODA seeks to support underrepresented students at Lawrence and address issues of injustice as they arise.  Under the leadership of Malcolm, CODA has increased its voting membership, added 3 new student staff positions, and released to campus administrators with scheduled follow-up meetings a 17-point list of recommendations to address the concerns of unrepresented students at Lawrence. Having experience as an active performer and advocate for diversity, Malcolm hopes to center his work on advocacy of and accessibility in the arts.  As a graduate of the South Carolina Governor’s School for the Arts and Humanities (SCGSAH), and former percussionist for the Carolina Youth Symphony (CYS), Malcolm knows how transformative the arts can be for individuals and communities. 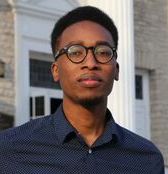