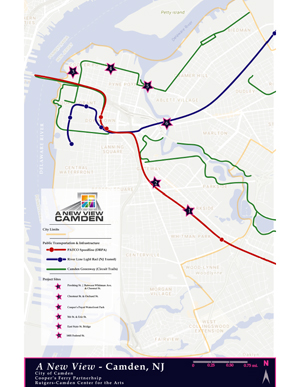 The City of Camden, New Jersey has received a $1 million grant from Bloomberg Philanthropies to clean up blighted areas around its transit corridors and to turn those spaces into showcases for public art. Camden was one of only ­five cities across the United States to receive a Bloomberg Philanthropies Public Art Challenge grant for 2019-2020. The other cities are Anchorage, Alaska; Coral Springs/Parkland, Florida; Jackson, Mississippi; and Tulsa, Oklahoma. The grants were open to cities with populations greater than 30,000 people; more than 200 cities applied. “A New View—Camden” will transform six sites in Camden previously associated with illegal dumping into dynamic art spaces, inspiring residents and visitors to take “a new view” of the city invincible.

This grant allows the city and its partners to use the power and creativity of artists to address a public issue. The leadership team, with members from the City of Camden, Cooper’s Ferry Partnership, and the Rutgers—Camden Center for the Arts, put together a strategy, called “A New View—Camden”, to address Camden’s illegal dumping problem, which costs citizens $4 million annually, and help change the often-negative perception of the city. Temporary art installations at six sites across the city invite the community to imagine a more beautiful, innovative, and healthier future by responding creatively to Camden’s history as a place for illegal dumping.

"A New View" will turn spaces that are blighted by dumping into public art spaces. The sites will be transformed into multipurpose spaces hosting art installations and community forums. Camden’s proposal was unique because of the core public/private partnerships, a collaborative relationship between government and the city's arts and nonprofit sectors, as well as the engagement of city, county and transit agencies.

A core team comprised of staff members from the city of Camden, Cooper’s Ferry Partnership, and Rutgers—Camden Center for the Arts, in conjunction with the Camden FireWorks art gallery, has been meeting regularly since January 2019. Two independent curators will select the art that will be installed on each site. A Curatorial Steering Committee, composed of local government, community and corporate leaders as well as arts professionals, was created to help with strategic thinking about the intersection between public art and the community. A Community Advisory Committee formed of Camden residents, will work with the core team throughout the duration of the project. A toolkit will be made available for neighborhoods and organizations to support and create projects of their own as part of the dynamism and energy we hope “A New View” will create. “A New View” is partnering with the City and the Camden Collaborative Initiative’s Illegal Dumping Taskforce, to raise awareness and spread the word about how to stop illegal dumping.

Interim programming has already begun, including a community photo contest on Instagram held this past summer. Requests for proposals went out to local and national artists and arts organizations this past summer. And, on November 1-2nd, 2019 at Rutgers University–Camden, 20 talented finalists for “A New View” presented their proposals. 130 applications were submitted from artists across the country, with the 20 finalists – chosen by curators Kimberly Camp and Judith Tannenbaum – representing a diverse cross-section of medium, experience, and background. The selected artists will be tasked with bringing attention to Camden’s multi-million dollar challenges with illegal dumping and use art as a mechanism to change the often-negative perception of the city.

Residents, community leaders, and visitors watched the twenty presentations given by the semi-finalists; the public was invited to watch and respond. The public art projects will use a variety of artistic mediums to create a new narrative for Camden, revealing a journey from a literal and figurative dumping ground to a place full of energy, artistic potential, and strength. Mediums presented included plastic sculpture, fiber sculpture, mosaics, found objects, metal, wood, clay, photography, and murals.  From these semifinalists, six artists/artist teams will be selected before the end of the year. Installation at the sites will begin in Spring 2020, and will be on view through October 2020.

Other program components include: Artist-in-residence programs in the schools on the theme of transformation and recycling; a Stedman Gallery exhibition on “A New View”, with a Museum Education program available free of charge to Camden City schools; apprenticeships for community artists; educational components, including a family guide for the public art; hands-on art projects at public sites; and public art workshops, lectures, and tours.

Can art solve the problem of illegal dumping? Illegal dumping is a chronic and costly problem for the city that affects the quality of life of many residents. There is no one solution for this issue, but “A New View” will reinforce the idea that Camden is a place of historical significance and creative possibility, and act as a catalyst for increased community engagement and dialogue in the arts.

For more information, including semi-finalist bios and portfolios, can be found on the project website. 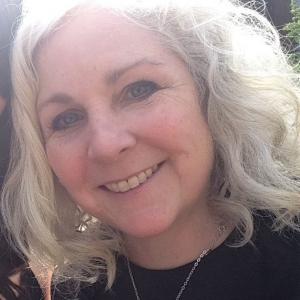