Back in February, when things were “normal,” Gracie, 12 years old, and Tim, 18 years old, set off to begin their 10th (or is it 11th?) season of Young Performer’s Workshop. They’ve participated in so many seasons and it is such a part of our daily lives, I’ve lost count. YPW, as the regulars call it, is a pre-professional theatre training program for budding thespians ages 8-18 run by the Centenary Stage Company in Hackettstown, NJ.

For more than 25 years, it’s been directed by Broadway and silver-screen veteran Michael Blevins, affectionately referred to as BLEV by the kids who catch the theatre bug and keep coming back for more of the year-round seasons of musical theatre. While new students are always welcome and some participate in seasons sporadically, there’s definitely a core group who just can’t seem to get enough of the crazy, awesome pace of mounting three to four full-scale musicals in one season, and who return season after season. Rehearsals encompass just about every waking hour of the weekend (less hours for the younger kids), but there’s really no place else they’d rather be. While rehearsing, both Gracie and Tim have fostered great friendships through this shared experience. It is truly a theatre family. 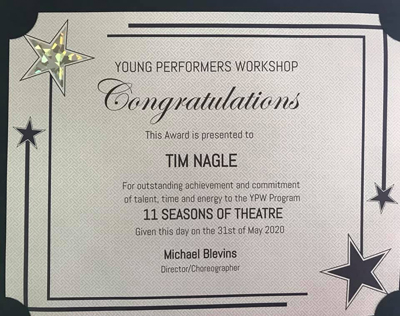 Tim joined YPW at the beginning of his freshman year of high school and never looked back. He caught the theatre bug and performed in 25+ shows during his time at YPW. This was to be Tim’s last season, as he would be graduating from high school and the program. The senior season is a much-anticipated culmination of one’s time at YPW. BLEV painstakingly chooses shows with the seniors in mind, to highlight their talents on stage. Each senior proudly takes ownership of their “Senior Show”, as they refer to it. Tim’s show would have been “Sweet Charity,” playing the role of Oscar Lindquist, plus performing in the three other shows of the season.

Gracie joined the program a season before Tim and likes to remind her big brother of that. Having both kids at YPW has been a blessing. With their 5½ years age difference, YPW bridged that gap and gave them something in which they could both participate. Gracie was looking forward to performing in Rodgers and Hammerstein’s “Cinderella” as the lead and an ensemble role in “Sweet Charity.” There were so many reasons to be excited for the Spring 2020 YPW season.

While anything can happen in live theatre, none of us could improvise what March 2020 threw our way. As events unfolded regarding the pandemic, it became clear that an intermission of sorts would need to be taken to let the virus run its course. The hope was that there would be a few weeks off from rehearsals, then the lights would flicker and the kids would take the stage once again. As with all aspects of life, it was strange to have their usual busy weekends spent at the Little Theatre come to a screeching halt. The kids felt confused, sad, and uncertain. We tried to remain hopeful, but as more time passed, it became clear that there was no way the shows could go on. The season was officially cancelled. 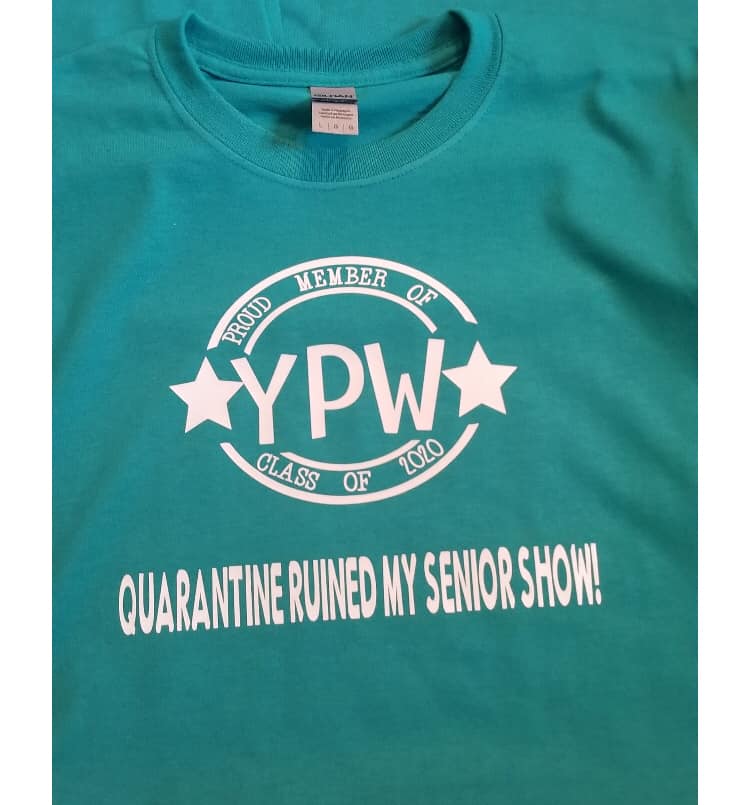 As we all tried to adjust to a more isolated life, the kids connected with school, friends, and family via technology. While not the same as performing in a show, Tim and Gracie participated in online tap classes with BLEV using the Zoom platform to keep up their skills and connect with their beloved director. Push the couch to the side, pull up the rug, log-in to ZOOM, and suddenly the family room is a dance studio.

We also feel for our theatre home, Centenary Stage Company, as they attempt to financially withstand these unprecedented times. As an arts hub here in the Skylands region of New Jersey, we want to see them ride through this storm. The kids were honored to represent YPW in a 35th Anniversary Pledge Drive promotional video rallying support for the theatre company. Videoing messages with our phones against a white sheet background has become the norm for home recording studios. “Necessity is the mother of invention” has never been more relevant than now.

As time marched on in quarantine and the dates of the spring shows approached, a feeling of incompleteness prevailed. Tim and the other senior YPW members would never have their “Senior Show” performed on the Little Theatre stage. Usually the senior members are briefly honored after the very last show of the night, just before we need to strike the set. 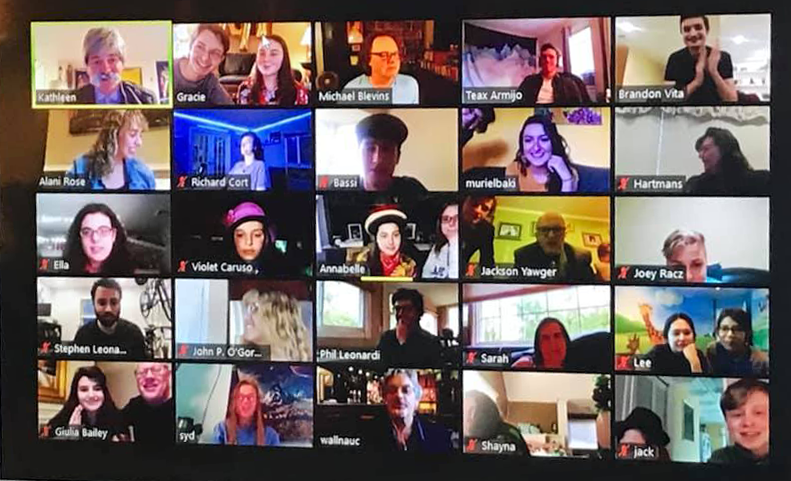 This year, since the whole season was lost, a beautiful 2-hour live senior send-off tribute was planned via Zoom. It was wonderful to see all the seniors highlighted with photo montages, video clips, and fellow YPW member tribute speeches. It was an amazing culmination of Tim’s time at YPW and a nostalgic trip down memory lane for Gracie and all the kids. After watching them all grow and flourish for so many years, they all have become very special to me. While it would have been wonderful to have had the shows performed, this tribute is something that we will always have to look back on -- a virtual scrapbook of memories.

While not the season we imagined, we are finding the silver lining and realizing that there are some beautiful, albeit non-traditional, performances resulting from this extended intermission. 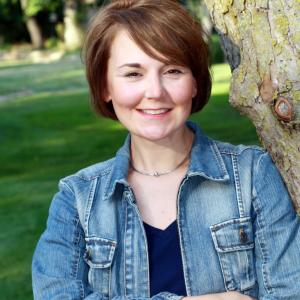 Lynnette Nagle is the proud theatre mom of Tim and Gracie. She volunteers her time to the Young Performers Workshop program as costumer.