Three reports from the National Endowment for the Arts reveal new findings about the impact of arts and cultural industries on GDP, as well as how and why Americans participate in certain arts activities. The data for the three reports is all from 2012, so for the first time the NEA can show a comprehensive view of a single year in the life of the arts and cultural sector from three different angles: supply, demand, and motivations for consumer behavior. The new information will help arts providers and others more effectively understand and develop strategies to engage individuals and communities in the arts. 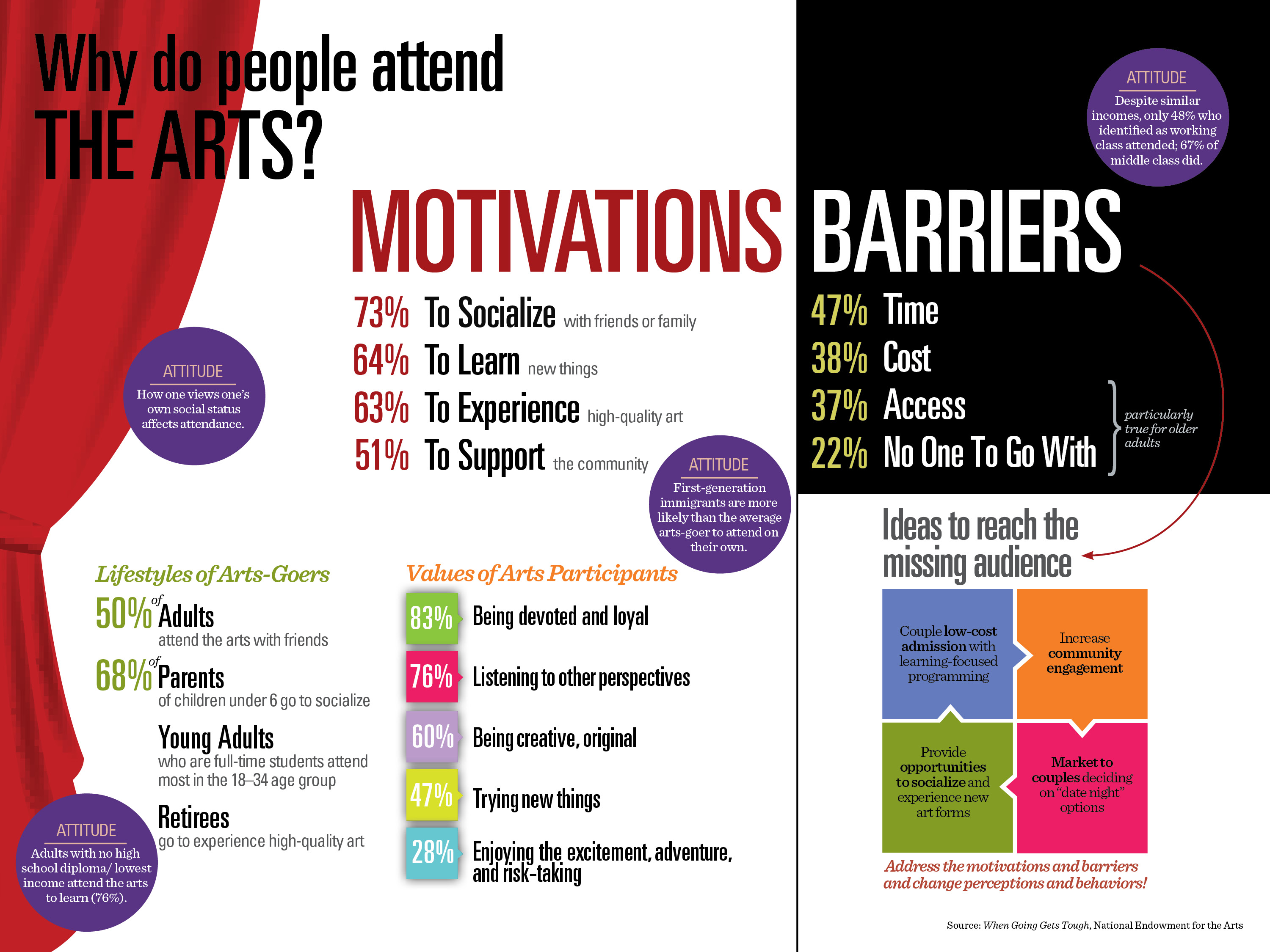 “The implications from this research are significant," said NEA Chairman Jane Chu. "The findings show that there is great diversity in how people engage in the arts, and this gives us a framework to use our creativity to innovate new ways to reach these audiences.” “With the creation of new data analyses like this one - which shows how arts and culture contribute to GDP - the Department of Commerce is providing a more detailed picture of what drives the U.S. economy, growth, and job creation,” said Secretary of Commerce Penny Pritzker, referring to the Bureau of Economic Analysis satellite account data discussed below in report 3. “Making new data available is another example of how the government is working harder and smarter to produce relevant statistics that better inform individuals, businesses, and decision-makers.”

In 2012, the National Endowment for the Arts partnered with the General Social Survey to ask why people attend arts events (specifically music, dance, theater, and visual arts). This new report looks beyond demographics to discover the attitudes, motivations, and barriers for attending the arts at different life stages—the first time the NEA has published a report on this type of data. There were common barriers for the 13 percent — 31 million adults — who were interested in a specific event, but did not go for some reason:

Report 2: A Decade of Arts Engagement: Findings from the Survey of Public Participation in the Arts, 2002-2012 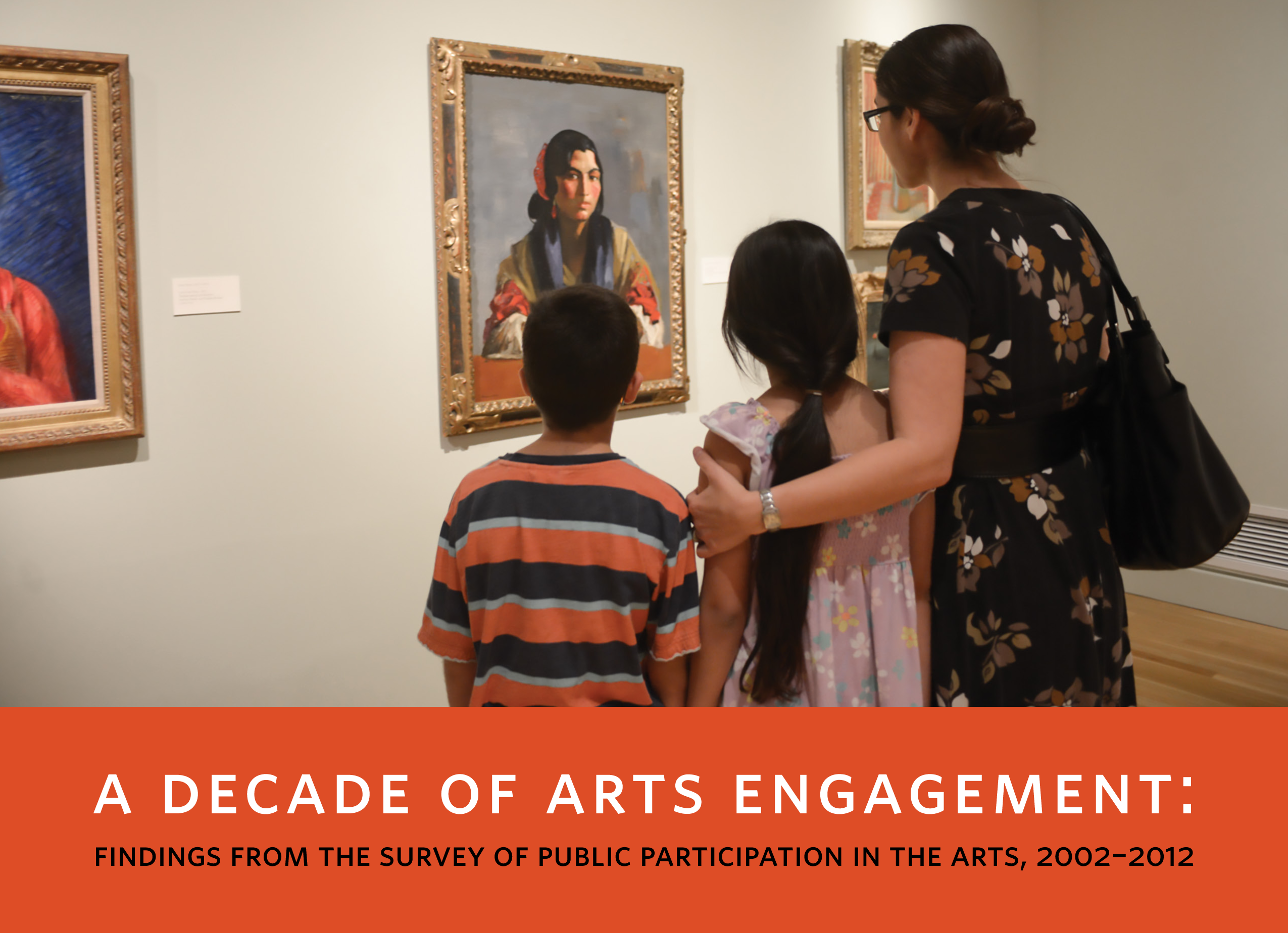 The Survey of Public Participation in the Arts (SPPA) is the largest and most comprehensive survey of U.S. arts participation, with a total sample size exceeding 37,000 adults, ages 18 and over. The latest SPPA compares arts participation rates based on surveys from 2002, 2008, and 2012, as well as regional, state, and metro-area statistics. 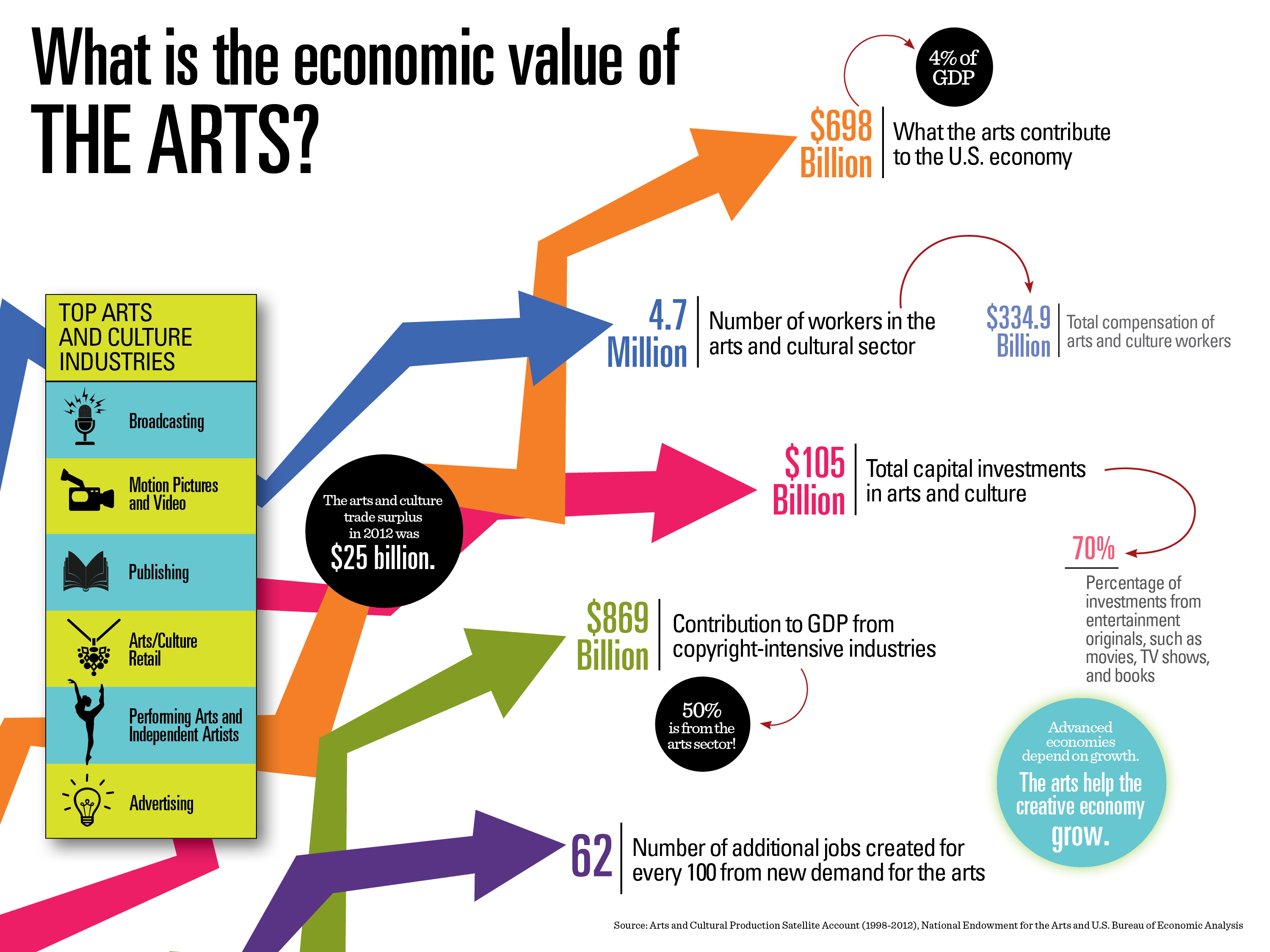 The ACPSA, a partnership between the NEA and the Department of Commerce's Bureau of Economic Analysis, is the first federal effort to provide an in-depth analysis of the arts and cultural sector's contributions to current-dollar gross domestic product (GDP), a measure of the final dollar value of all goods and services produced in the United States. The revised estimates reveal the arts are a bigger driver of GDP and jobs than previously estimated. Among the new estimates are:

The underlying data for the SPPA and GSS research reports are available to researchers, policymakers, and arts practitioners via a brand-new online resource also being launched today. Through the National Archive of Data on Arts & Culture (NADAC), the NEA provides free access to the data files and related resources, as well as a user-friendly platform for querying the data. Visit NADAC to learn more. The NEA is the only federal agency to conduct periodic analyses of the value and impact of the arts in American life. For nearly 40 years, the NEA Office of Research & Analysis has produced research publications, conferences, and data sources on arts-related topics of interest to policymakers, educators, journalists, cultural researchers and practitioners, and the general public. Many of these products have emerged in consultation or collaboration with other federal agencies such as the U.S. Census Bureau and the Bureau of Labor Statistics. In recent years, the NEA launched a new research grant opportunity to support research that investigates the value and/or impact of the arts.

About the NEA The National Endowment for the Arts was established by Congress in 1965 as an independent agency of the federal government. To date, the NEA has awarded more than $5 billion to strengthen the creative capacity of our communities by providing all Americans with diverse opportunities for arts participation. The NEA extends its work through partnerships with state arts agencies, local leaders, other federal agencies, and the philanthropic sector. To join the discussion on how art works, visit the NEA at arts.gov.